When there is the opportunity to do something spectacular in this car-cult driven industry of ours, the full achievement of that often depends on circumstance…. and sadly also on the probability of clouded thinking and limited vision.

I guess the number of lost opportunities could fill a library and the number of frustrated engineers facing countless stoppages to otherwise fruitful endeavours would be difficult to estimate. Many promising projects have been stopped for good reason but I will cover just two such adventures that were not. Both of these could have changed their environments dramatically. “A very different 442” is  one of these, a project running at a time when the industry was facing  huge environmental challenges and would have elevated the team concerned to being ground breaking innovators.

The other, an essential project for the company involved, died through lack of vision… ‘The Lost Diamond’. …..we will start with that one first…

Picking up from the Dealer Team Vauxhall story in the previous post, 1974 was a stressful time for all manufacturers in the go-faster business. The first Fuel Crisis which hit late in 1973 forced those folk with commitments to motor sport into a bit of introspection.  Thankfully, most hung on to their beliefs and realised that whilst the short term bleatings of those conveniently misusing the circumstance to bang their own agendas, were just beating empty oil drums. They believed this would pass over and get back to normal….and that is exactly what happened.

Within 18 months, things were back in gear and the self-righteous mutterings of those ‘no racing’ pseudo bunny huggers no longer held currency. In the UK, after facing a fair amount of media criticism at the time, Vauxhall, of all manufacturers, came out of this showing what they were really made of.

Uncharacteristically for a GM operation, they displayed a determination to launch their first ever Homologation Special smack bang at the height of the crisis. The HC Vauxhall Magnum arrived and signalled the first attempt by GM Europe to market a car specifically directed at motor sport. They did this exactly ten years after Ford had done the same thing with the Lotus Cortina.  Only 200 odd units were built and all in silver. 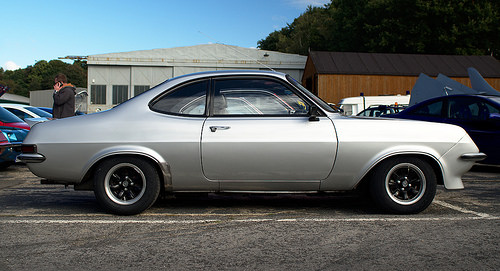 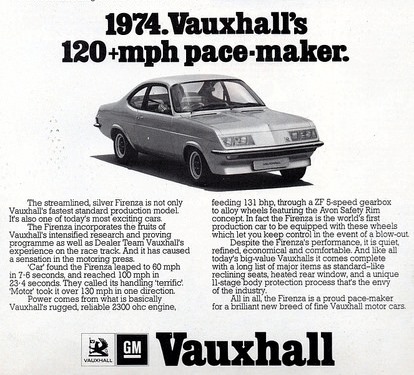 This is the single-make race in which Vauxhall bravely signalled the launch of the ‘Drop Snoot Firenza 2.3 Magnum’ and where they came in for that hammering by the press.  But they hung on. History shows VM reaped the benefit and as noted previously, that car sorted saloon car racing in both modified and group 2 racing in the UK for years.   The success of this venture ended with a spectacular class win in the 1977 24 hrs of Spa where Gerry Marshall and Peter Brock finished second overall. In the process the Vauxhall beat the 3litre Capris and all but one of the other BMW Factory racers which won the race. That stuff does not happen without significant commitment, Vauxhall Dealers along with VM did a magnificent job with this car.

Let’s now move to South Africa, it is 1973 and GMSA have entered the motor sport arena with a creation that will go down in history as the most iconic SA car of all time, the V8 Firenza Can Am. This was a serious Homologation Special and to those looking on, be they motor sport folk or observers on the side-lines, this was the General giving a powerful message to all. If you recall the Dealer Team and GM PR during that time, the Giant was waking from a deep sleep and coming to rearrange the racing landscape and show everyone how this should be done. 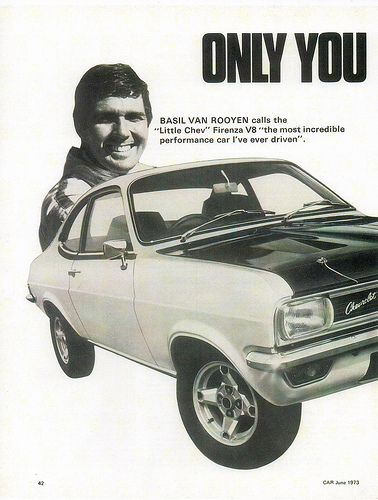 In retrospect, in 1973 that actually happened, expectations were high and even the nay-sayers inside the company moved themselves over to catch the reflected limelight. Unfortunately GM were very loud about it. That scared me witless because, as one of two or three reasonably experienced motor sport people inside the organisation, I knew something the PR guys did not know (or knew and were too high on the winning streak ‘fairy tale’ to acknowledge)……motor sport is a very hard taskmaster and this approach can have the consequence of biting you in the butt.

The Failure of the cars at the 1973 9-hour threw this very self-appreciating approach into a tailspin, which, allied to the co-incidental fuel crisis, resulted in the General closing the dealer team. That was sad in itself but not as sad as the fact that GMSA had the answer to a recovery ready and waiting, parked in their engineering department. The prototype had hit the right numbers and the project had been approved for a car that would change the face of GM’s otherwise rather old fashioned approach. More importantly, would build on the job the Can Am had started.

…..We had our own more user friendly version  of what Vauxhall were doing with the Magnum ….at exactly the same time and had exactly the same opportunity to weather the difficulties and recover.

Here it is at the EL GP circuit in mid-1973, I apologise for the quality but it is the only remaining picture I have of the car….. 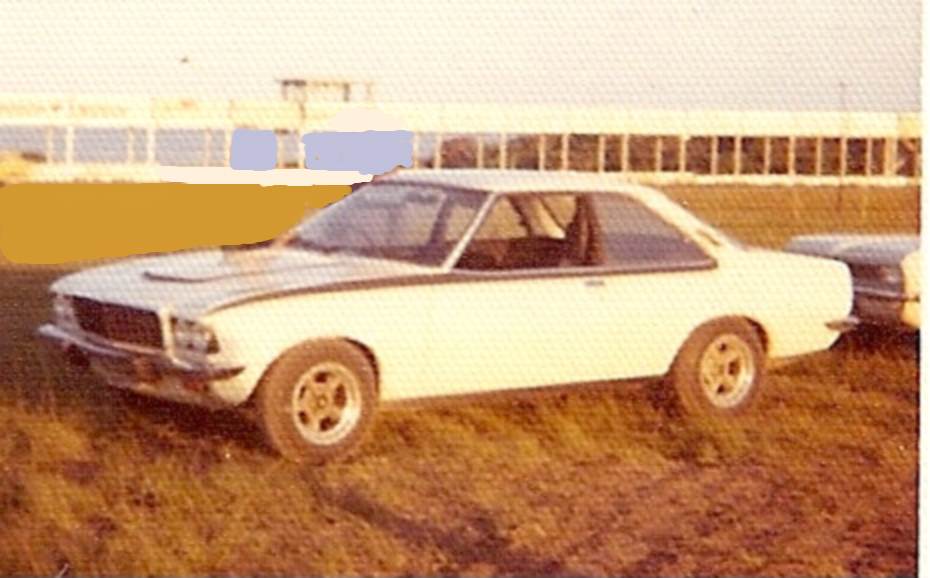 Now let’s face it, the Can Am is/was spectacular but at the time had about as much connection to GMSA’s in-house culture, as a Ferrari has to the Queen Mary. I could not get my mind around how this magnificent machine had any relevance to what was really going on in our company……The 3800 GT plugged that hole perfectly, something the man in the street could easily identify with. The 38/4100 range was South Africa’s best-selling car at the time and no one will convince me that there was a better and more cost-effective platform on which to base a performance car anywhere on the planet.

Fitted with two twin choke downdraught carburettors, raised compression ratio, a re-machined big-valve cylinder head, mildly uprated cam profiles and properly tuned “headers”, the engine produced exactly double the nett output of the somewhat agricultural stock 230. It sounded great and buzzed to 6000rpm. Suspension was lowered and tuned along with upgraded brakes front and rear. This car was being built alongside the prototype Can Am in the engineering workshops at the same time. The only person outside of the GM engineering team to experience the car was Basil van Rooyen… I am sure he will remember the blast to 120km/h alongside the crates in the unboxing yard quite vividly!

The 3800 GT knocked the equivalent Opel 2800 GT/E Commodore Coupe into a cocked hat and after driving the local car, a visiting delegation from Opel had their noses completely out of joint.

Phase two (resisted by those not directly involved) was to build a 4300 homologation special with a substantially reinforced version of the local cylinder block, mated to the very potent 12-Port Argentinian Racing cylinder head. In racing form, this near-on 440 Bhp monster would have circulated Kyalami over 2 secs quicker than the Can Am…right on the BMW Batmobile times. The Opel’s far superior ‘aero’ helped, calculated to give a top speed around 10-12Km/h above the Can Am with the same horsepower. The road car would be only 80Kg heavier than the Can Am. 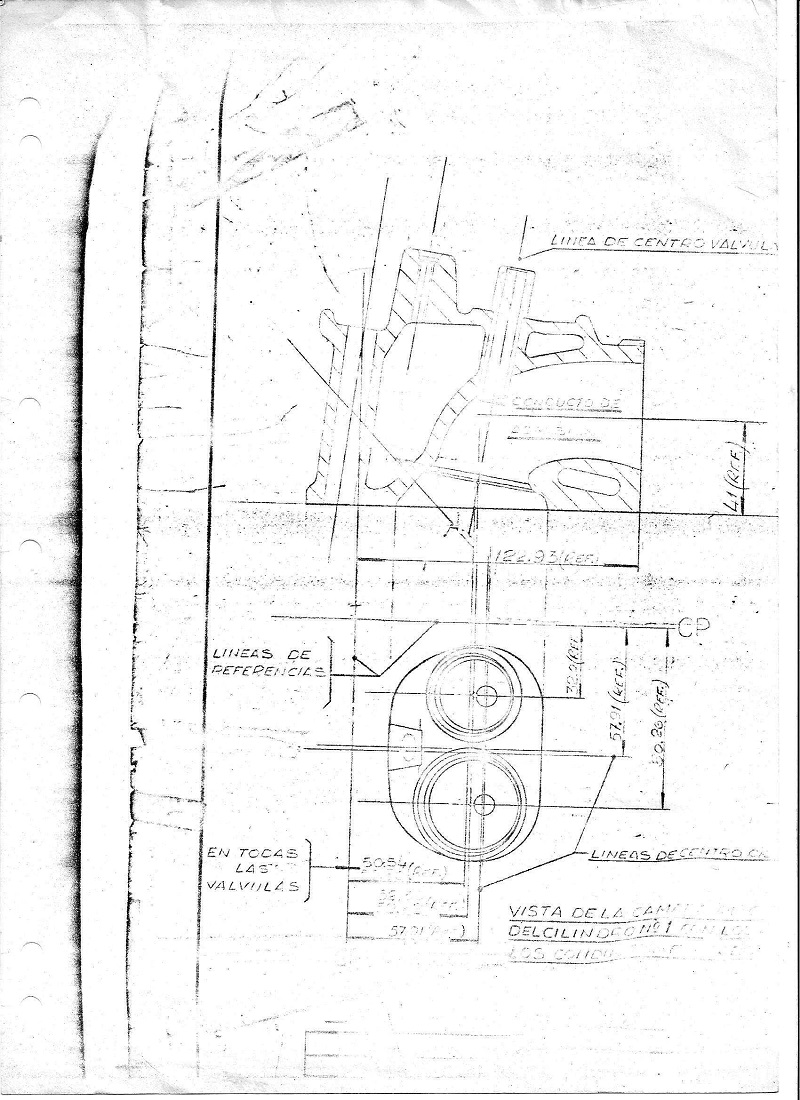 A copy of the Argentinian 12 port racing Cylinder head drawing for the L6 Chevy. Showing inlet port and combustion chamber. This pic to validate that the part really did exist. We had to learn a little Spanish.

The whole project was canned in January of 1974 ……In favour of a six cylinder version of the standard station wagon..

The Lost Diamond never did see the light of day. There was just not enough oomph at corporate level to follow the Australians.

I guess those who are cynical would question whether the ideals of this programmes were realistic… believe me they were…. As far as a road car was concerned it was an affordable unique offering, the perfect supplement to the Can Am but this time giving useable performance as a daily runner. The intention was also to make available the quick bits to owners of stock 38/4100’s as well as the entire Chevrolet/Holden range running with the 230/250 engines, this aspect alone would have paid for the project.

Here is the ultimate irony in this particular saga. GM never did do anything constructive with this fabulous range of cars which died in 1978 when the model line was replaced. (Sadly the car going out of production was virtually unchanged from the introduction in 1972). In ‘78, with the range now out of the showrooms, Ben Morgenrood, a privateer racer at that time, built a race version of the heavier four door 4100, with the nine port production cylinder head and four speed gearbox. It became the fastest saloon car in the country and lapped Kyalami fractionally quicker than the V8 Capri Peranas…. but not quite as quick as the Can Ams.

Here is a parting shot….that 3800/Opel Commodore platform is the car that started the Holden Commodore legacy in Australia…..I say no more.

See you next week…. do you recall the Oldsmobile 442?  We will take a look at this moniker, but from a very different perspective.