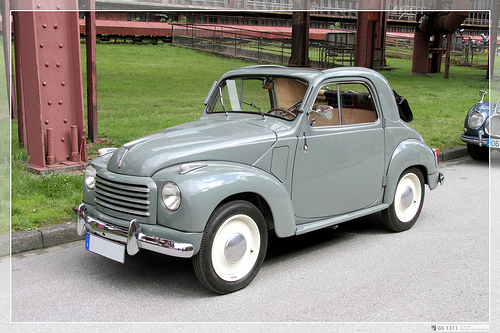 ……along came the Nuova 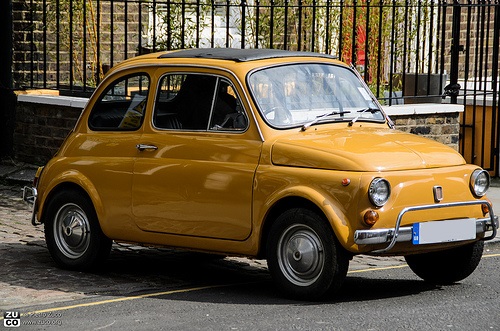 Cinquecento…. a car that mobilised a country for 20 years and left a legacy as important to Italy as the Beetle was to Germany..this turned out to be a Mighty Mouse indeed. Over 4 Million were built between 1957 and 1975 and for those of us privileged to see these little machines darting around the cities of Italy, one could see exactly why there was the fabulous appeal. 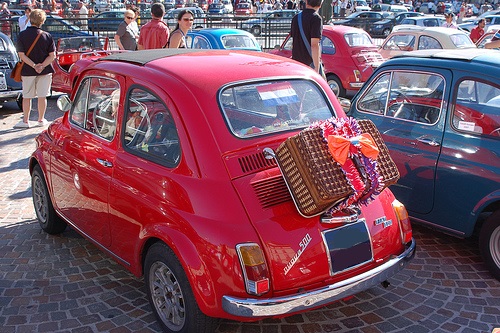 The versatility of these machines legendary

The Nuova has a very special place in my heart for a number of reasons, the most obvious of which being that one of these gems was my first car. Unlike most teens in the later part of the 60’s, I had absolutely no desire to go mopedding. The thought of a motorbike of any sort being an option for transport never occurred to me, this was 1967 and I was the archetypal saloon car enthusiast of the times. Don’t get me wrong, bikes have always been intriguing  from a tech point of view but when you have 50 bucks of hard saved dosh to spend and you are confronted with the choice between a second-hand moped, or a second-hand Fiat 500  (despite the car needing huge TLC)…..for me….no contest.

For those who have not been able to savour the virtues of this fabulous little car I can only say that despite the meagre horsepower and sparse interior there is a charm about the machine that is entirely captivating. Shortly after getting my car mobile in 1967, the Xmas holidays arrived and a trip from Port Elizabeth to Durban (900Km) was gobbled up in a day.  One learned that to maintain an average speed of around 50mph there was no such thing as cruising at the fixed speed one would in a more powerful car. It was a case of running at full throttle all the time….. hills and dales traversed at speeds  between 75 (sometimes faster) and 40 mph. The experience very different and one had to get used to the odd truck passing on the steep bits. 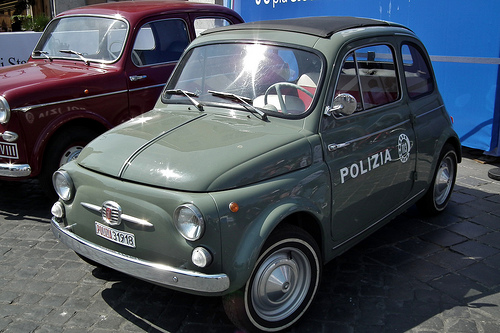 For folks not familiar with the 500 here are some tech facts. Originally powered by a 479cc vertical twin air cooled engine, which grew to 499cc, mounted behind the rear wheels and with VW Beetle-like swing-axle rear suspension, this was an Econobox of note. Originally built with fabulous rear- hinged suicide doors until the safety police stopped that in around 1965, I cannot recall any vehicle easier to get in and out of. The basic simplicity of the design extended to little touches like a cable operated starter (no solenoid) centrifugal oil filter built into the crankshaft pulley and no synchros on the four speed gearbox. Fast? ….No…. Max speed on the later models was just over 60 Mph and acceleration was…well…not so much acceleration but gentle perambulation. 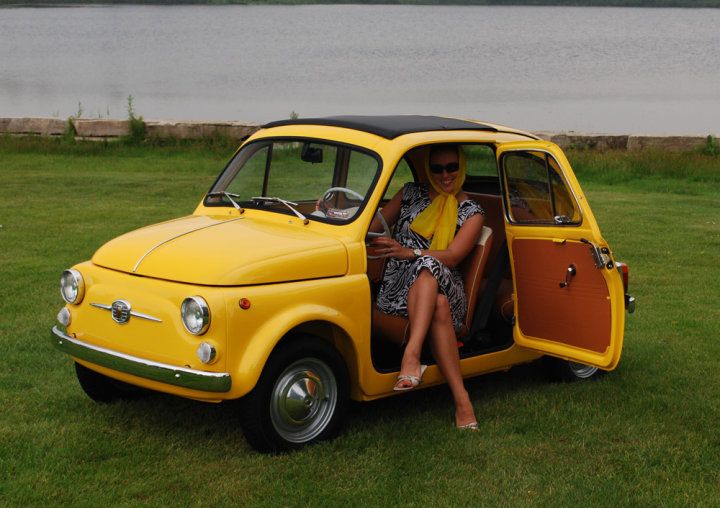 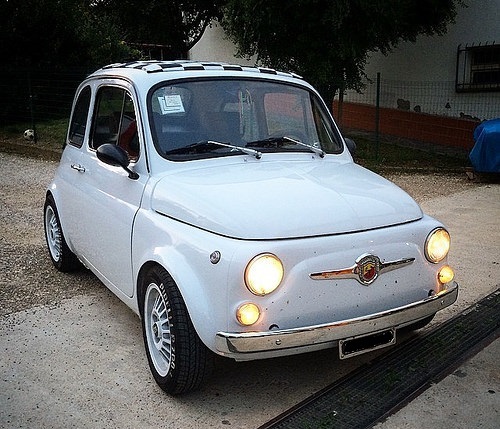 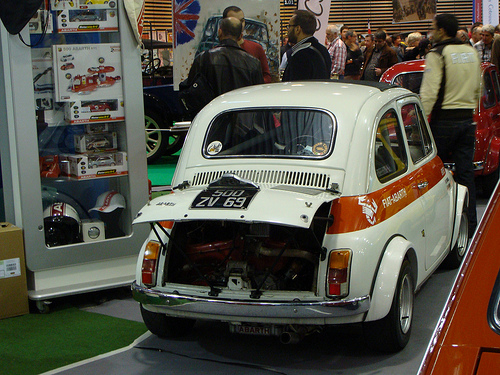 The Abarth versions of this tiny creation are some of the most sought after classic pocket rockets around and the Abarths came in two engine sizes, the 595 SS and the 695 SS. The latter having a top speed of over 85Mph. You could park one of those in my driveway anytime and leave the keys!

There was one better though and my personal favourite amongst the quick versions of this car…the Steyr Puch 650TR 2. Built by Steyr in Austria using the 500 body shell and with a 42Bhp 660cc flat twin Steyr engine this pocket rocket could top 90Mph and accelerate to 60mph in around 14 sec. ..not far off the 1071 Cooper S of the same Era….and whilst the BMC boys were telling the world how great their cars were on the Rally front…..they forgot to mention that the Steyr Puch rally cars were often faster. 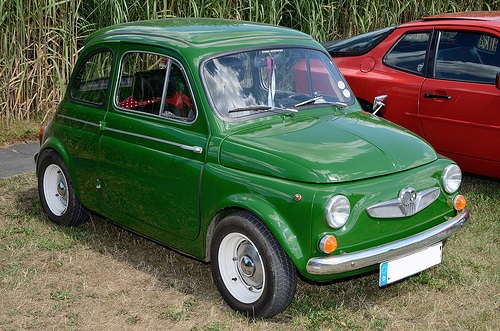 So…we’ve established that one can make these little cars run very rapidly indeed and it was a great pity that so few of the Abarth versions made it to SA…but that did not stop one very committed 500 enthusiast from Port Elizabeth create what must be the most unique application of the marc ever…I seriously doubt there is another anywhere.

In a serendipitous turn of events a 500 was turned into what could be termed in Italian….. “Settecento cinquanta Albero a Camme”…. to us….a far less complicated   “Seven Fifty Overhead Cam”. The story goes like this……

And how this original: 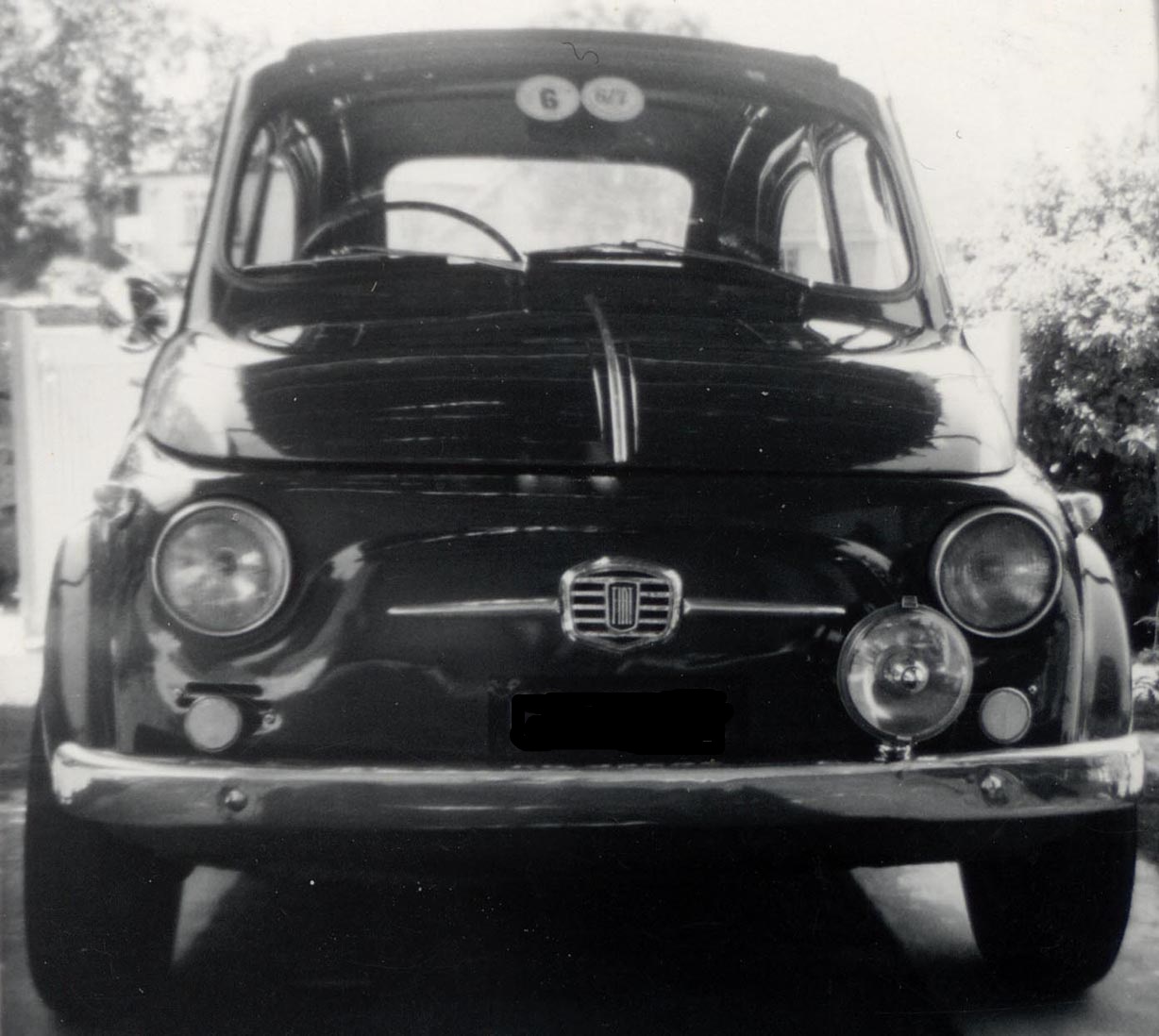 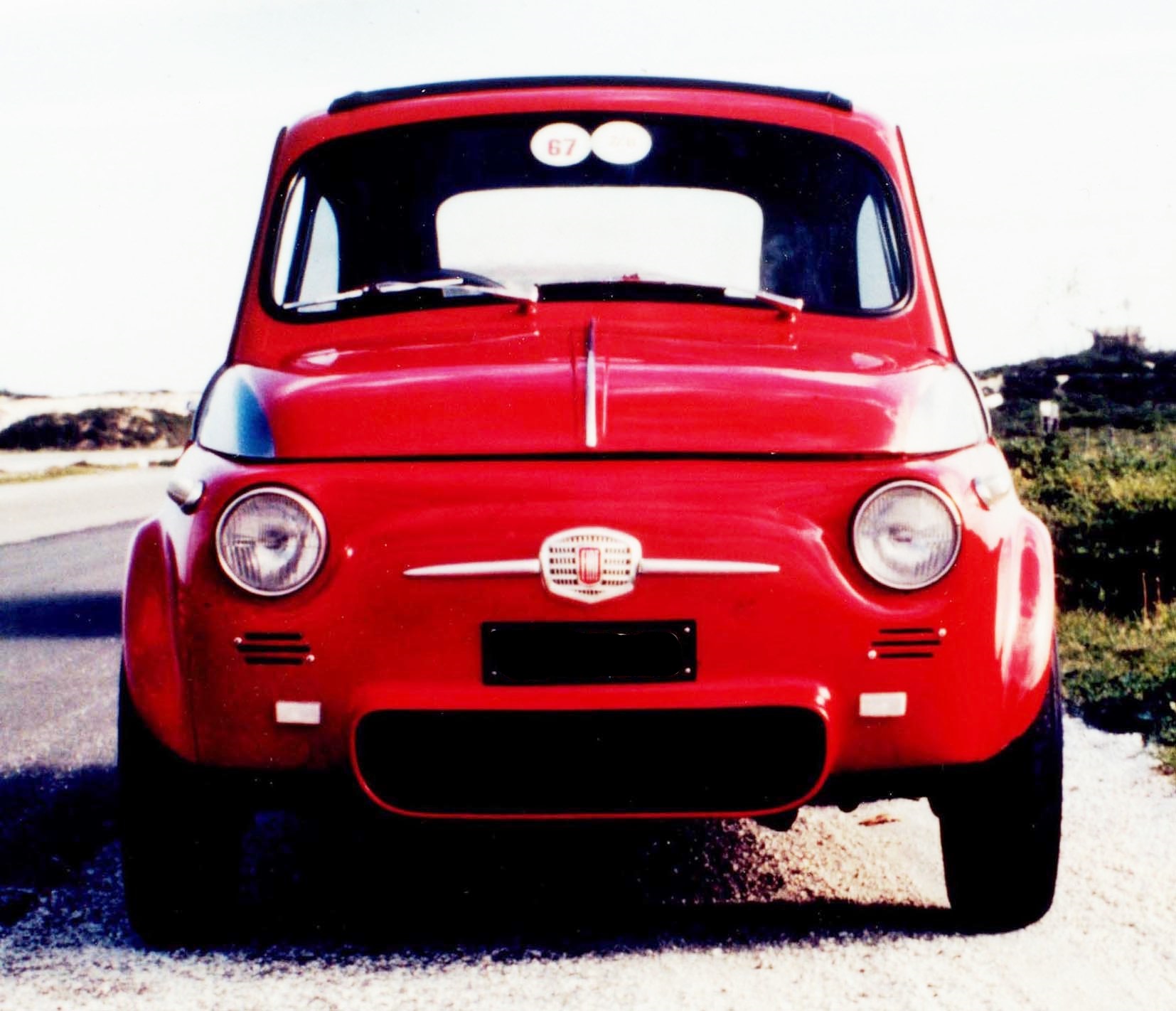 It is 1967 and Dave, a young engineer at GM South Africa and Italian car enthusiast is the owner of an immaculate Fiat 500, absolutely stock but fitted with 135 Michelin X’s (as opposed to 125’s), a spot light and a set of serious Fiamme air horns which, when activated, produced 18 wheeler sound but I suspect slowed the car down.

On the advice of a friend he was informed of a car of Italian origin out at the salt pans in Port Elizabeth and which was apparently fitted with a really small overhead cam engine. Duly interested, we went to view the rusted wreck which had been there for quite some time.  Why anyone would want to store a car on a Salt pan I would not know and in this case the salt had done its job, the body of this particular machine completely rotted…but…. the mechanicals  looked to be in reasonable condition. It was at this point that he established that car was a Moretti.

It did not take long for Dave’s Italian connections to determine that this was in fact a very rare Moretti 750 fitted with the single OHC version of that engine. Moretti, a small Italian manufacturer with strong ties to Fiat had started making cars shortly after the war and produced a number of sedan and sports cars using various version of their 750cc engine, which surprisingly was available in both SOHC and Twin Cam form.  It did not take long for the penny to drop and, after the required negotiation, the ‘salt pan 750’ was earmarked for fitment to the 500.

I had met Dave some years before and whilst he was in his early years at GM engineering, I was in my first year of training in the Service division, also at the General . The strong common bond of petrolheads finds its own level and soon I was involved in the fascinating project. This was my very first exposure to the world of modding cars as a ‘green behind the ears’ enthusiast.  As a learning experience one could not have found better, Dave’s Dad was a foreman in the bodyshop at GM and a skilled artisan, an expert in sheetmetal and welding…..Dave…. not only a good engineer, but a perfectionist . That combination led to some fun times but as is always the case when seeking the best outcome; the end result was well worth the effort.

I watched, helped and learnt as the machine progressed with three major tasks happening simultaneously. Radiator fitting at the front,  Engine installation requiring clutch and bell housing mods, the fabrication of an engine X member and  finally that magnificent paint job. The engine was stripped, found to be fundamentally sound and rebuilt using new parts but otherwise left unmodified. There were naturally a bagful of other jobs to be done such as electrics, piping to the front mounted rad, suspension mods and instrumentation. Dave’s persistence and attention to detail the driving force in the process.

We discussed the drivetrain and whether the Gearbox, final drive and sideshafts would hold up to the extra power. Dave being ever pragmatic reasoned that keeping the drivetrain stock would identify a weak spot which he rightly nominated as the external wheel hub universal joint and sideshaft combination. This first line of failure would prevent more serious failures of internal components.  His intentions were never to drag race the car but to rather enjoy the outcome and run the machine with any limitation there might be….and that is the way it turned out. 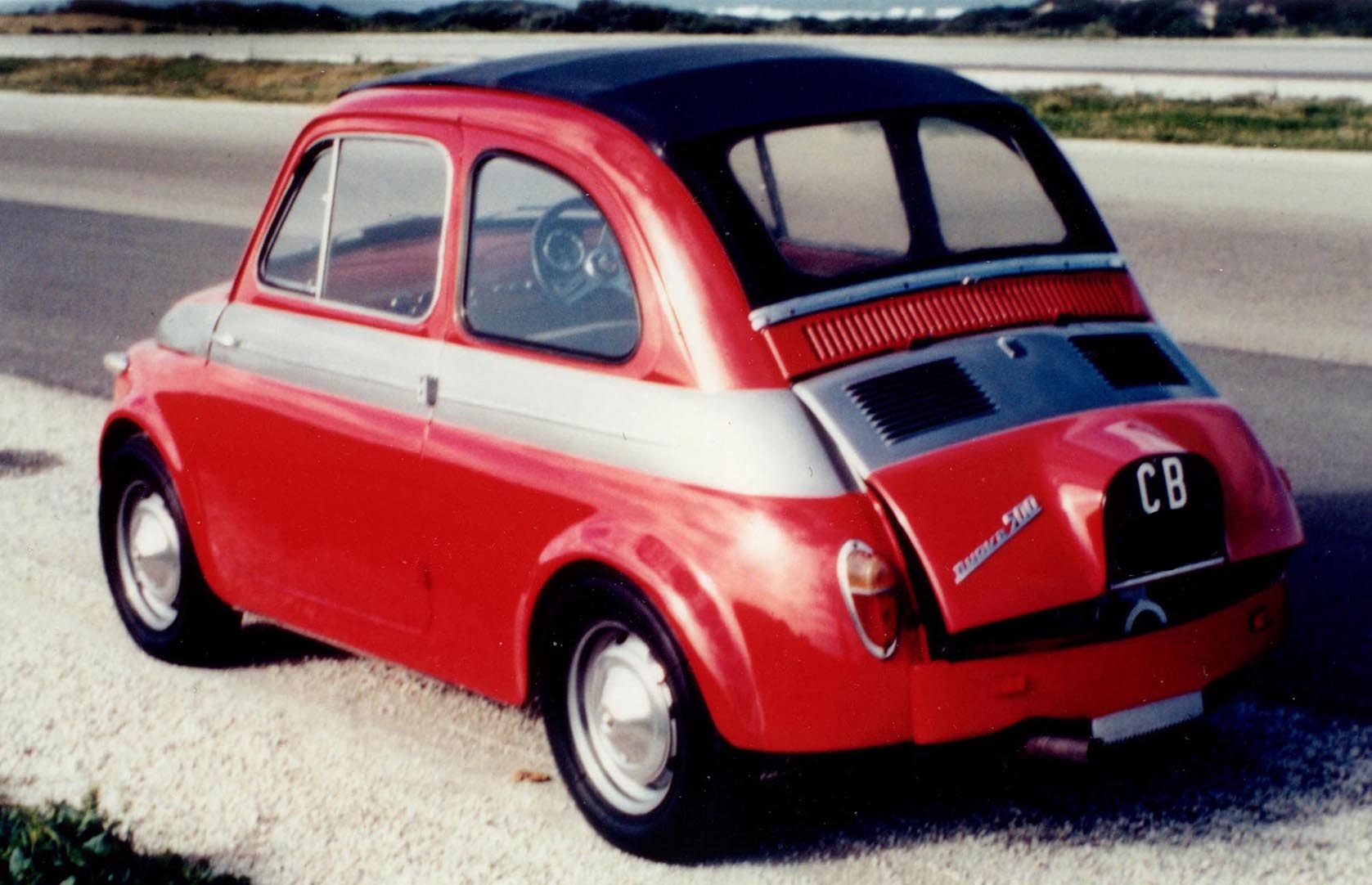 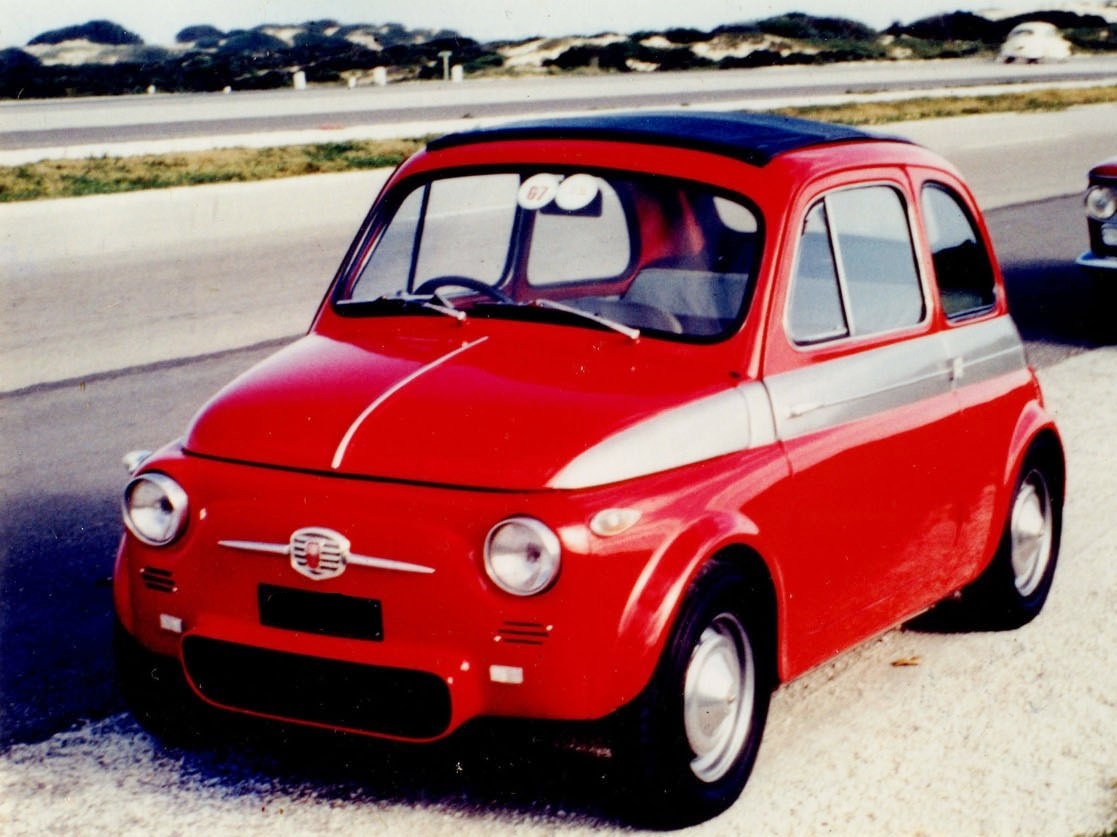 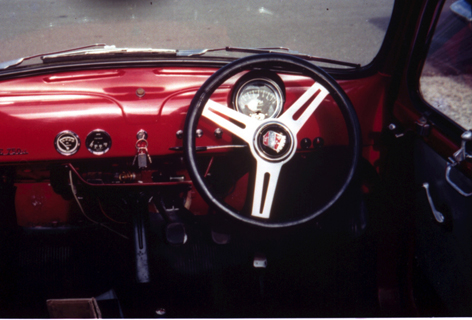 This was now doubly Italian and what a really nice car. The exhaust note throaty and with power increased from 20bhp to around 40 in a car weighing less than 530 Kg resulted in a nifty power to weight ratio equivalent to quick sedans of the time.

Handling was surprisingly good with the rear suspension lowered to give reasonable negative camber and the obligatory sideshaft straps to prevent swing axle ‘tuck under’.  Brakes were stock and probably one of the less flattering parts of the car but again kept in good condition and adequate in the hands of a competent driver.

The final outcome?  …. Huge fun….PE was Motor city and probably had more modified saloon cars on the road per capita than most…..the little Fiat could show a clean pair heels to many of them and the looks on faces for folk on the receiving end…. priceless. The car was used as a daily runner for many years before the lack of engine spares forced its retirement.

Next week….That special Fiat 500…..The passion we have for our cars stays with us always and for Dave, the need to build the ultimate 500 has been realised. This folks, is a work of art and I don’t quite think you are going to believe what you see…..Till next week.