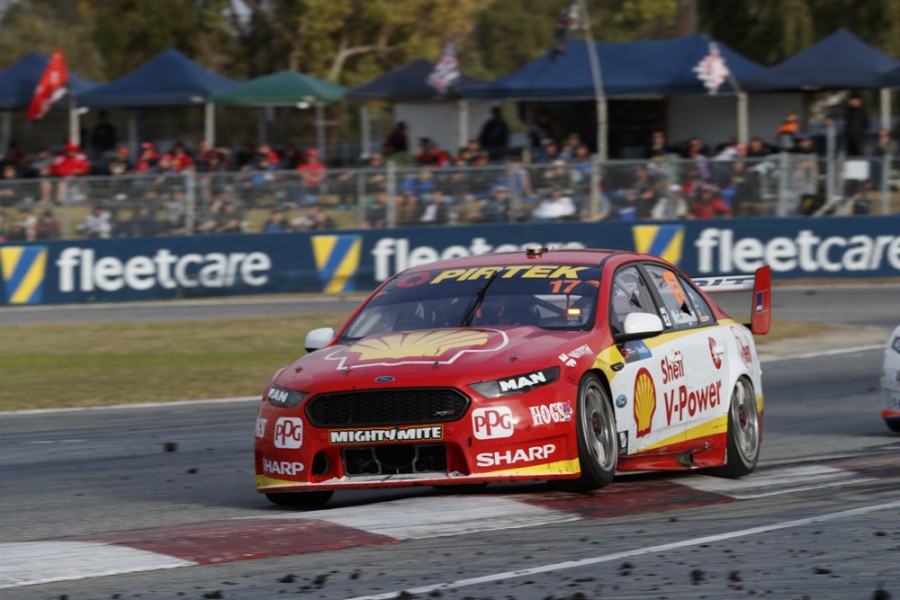 Another fascinating weekend…. and DJR Penske makes a statement. By the end of Qualifying on Saturday the numbers looked ominous with the Blue Oval having secured 6 of the top ten spots and had locked out the front two rows. The Holden men looked a little non-plussed and quite frankly, whilst I had predicted that Ford were on the comeback trail, never expected it to be a landslide.

Then, qualifying on Sunday and a reversal of proceedings, with only two Fords in the top ten. What we learn from this is that the revised qualifying procedure for the super short tracks really does shake up the numbers and final grid positions are not necessarily a true reflection of ultimate pace… and, as we were to see in race 12… that is terrific for racing. McLaughlin, through a combination of brilliance and blind luck at one point, left the west coast with a 300 point haul. Craig Lowndes an impressive 25th to 3rd in race 12.

The Philip Island troubles for 888 were carried over to Perth with the team ending in 8th 12th and 14th spots in that first qualifying session. The highest placed Holdens being Tim Slade in 5th and Dave Reynolds in 7th. Whilst this did not look too good, the Holden boys were talking about having good race pace which to a degree did prove to be the case in race 11. SVG moved up to a charging third, with Slade in 4th. Initially Reynolds looked to be making progress before a problem in the pits with a wheel nut lost him 11 seconds… and that in this game lost him 10 places or more and from which he could not recover.

Whincup incurred another penalty…and he did not have the pace… to be classified 13th which did his championship comeback no good at all.

On to race 12… In this one we have to feel for Dave Reynolds because he drove a race that in normal circumstances would have put him in the winner’s circle…but…he did not count on one Scott McLaughlin. We will cover that drive under the Ford scribblings but Dave drove brilliantly and at one stage towards the end of the race was in a position to challenge Scott for the lead. He backed off to secure second and apart from a self-inflicted ‘oops’ into the sand trap on the very last corner before the line, recovered valuable championship points.

Nice to see Craig Lowndes living up to his reputation as a real racer. His move from the back of the grid to 3rd  place in race 12 just as good as McLaughlin’s run from19th to first.

So…with two fast Holdens in Reynolds and Lowndes, the ZB looks to be still in the game, however, the Red Bull guys are making a meal of things and need a clean run to see where they stand. 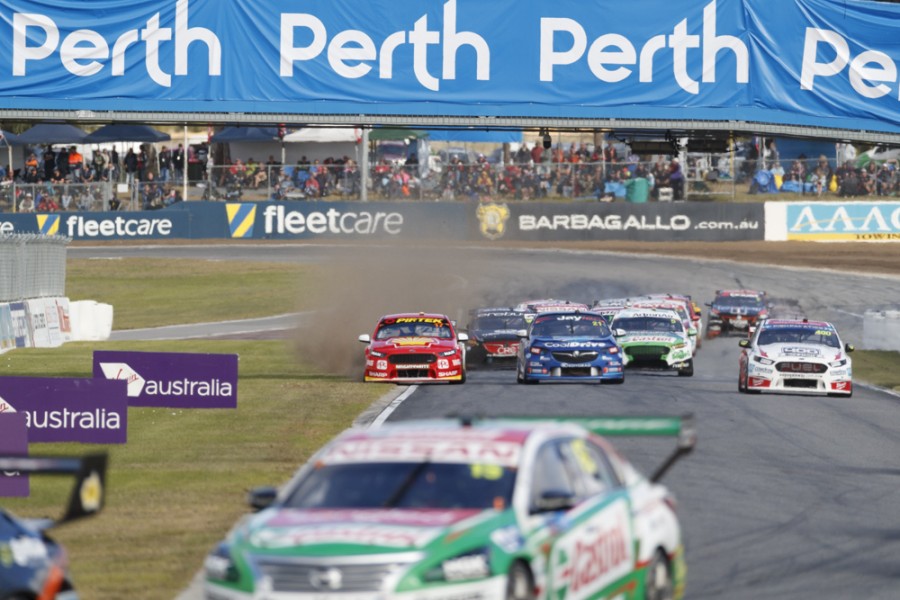 McLaughlin on the grass – This is where I think he won race 12.

DJR certainly made that statement for Ford and did so emphatically. Watching the in-car shots with Scott and comparing those to SVG, one quickly sees how much extra work was going on in the Holden cockpit. This largely sums up the difference between the two ‘Works’ teams at the moment. That was not all though because the Tickford men also came from nowhere to be on the pace, so we have yet to see whether the overall Blue Oval resurgence is as much track specific as I think it is. My comment last time was that the Tickford guys should chill a little to get themselves back in the game….well I’m not sure about chilling but back in the game they certainly are.

McLaughlin’s performance was stunning and I think with this sort of form and with no clear championship challenger having yet surfaced in the rest of the pack, he could continue stretching his lead while the rest sort themselves out. You may remember and as noted in my last report, that it was really at this point in the 2017 season that Scott started showing his dominance. I believe this will continue this year…Holden and the rest of the field are going to have to pull a rabbit out of the hat to stop this freight train. 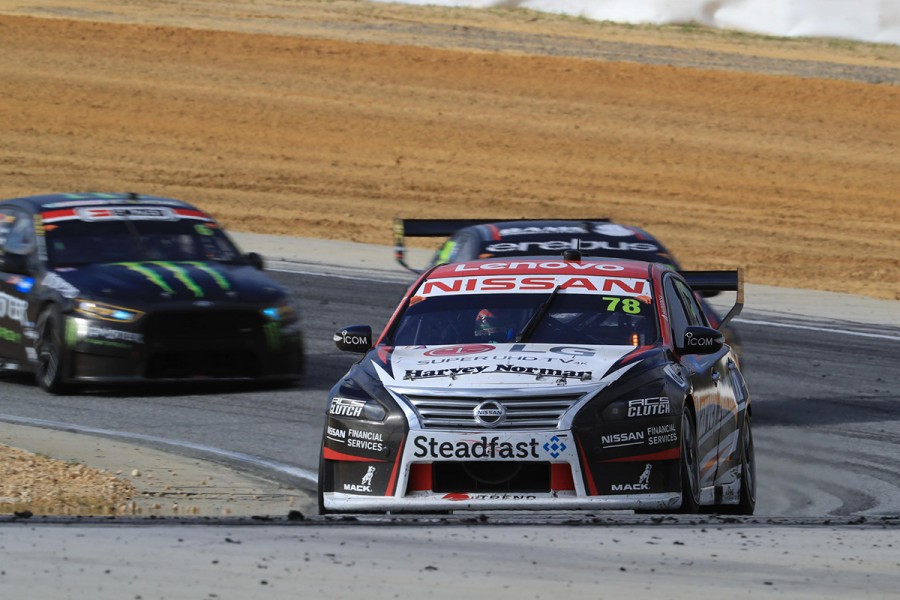 What can I say? So near and yet so far perhaps? The important issue though is that there seems to be an overall improvement. Problem is that it is scattered. Individually we saw almost all of the four team members get amongst the top guys at one point or another but not consistently. I hate to say it again but from an armchair perspective there needs to be more focus…split the team into 2×2 or something…chuck all resources at one of the drivers…But do something to unlock a consistent run. 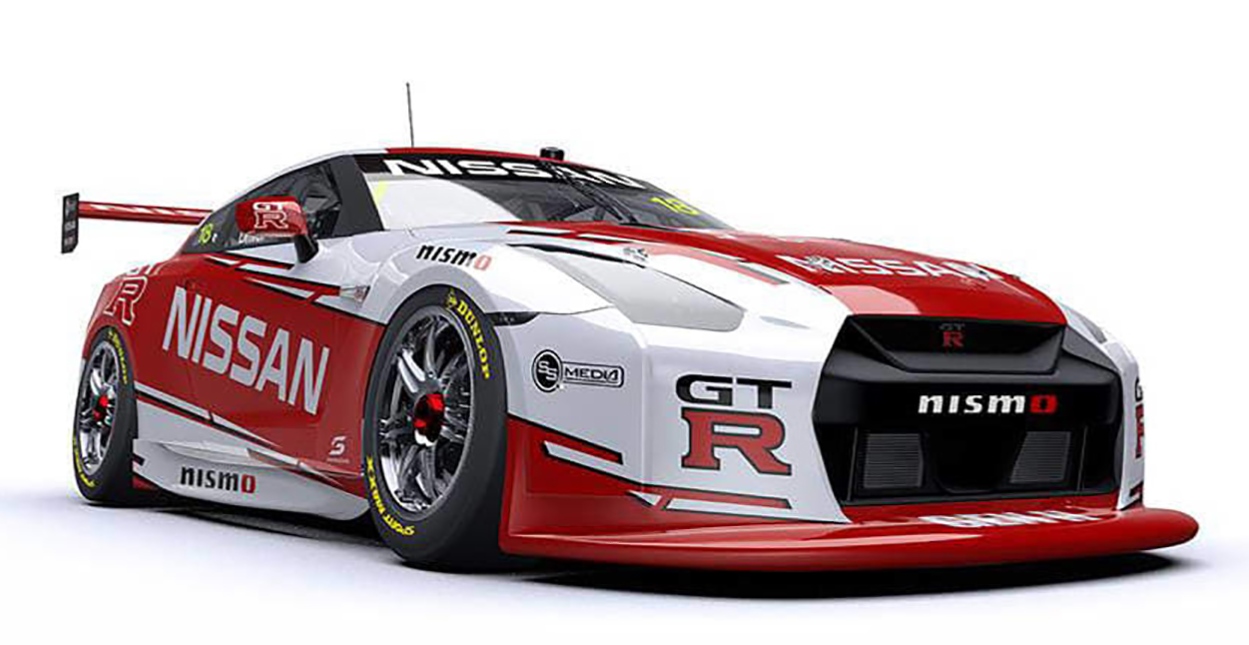 The arrival of the Mustang for 2019 has set off a chain of speculation on both the Camaro and now the GTR. Must admit that would be a mouth-watering prospect for the series but I am not too sure that either Holden or Nissan could get the job done in time for next year. The other aspect of this possible move is how the homologation team is going to go about achieving parity. The undoubted factor of a lower C of G for all these cars is yet to play out and in the case of the Nissan, the fundamental shape of the car in stock form leaves the other two for dead in the aero stakes. Maybe just for starters a mod on the Supercar cage to accommodate the revised silhouette would be on the cards.

Interesting developments…. but as always have faith in the Supercar admin team to get the job done.