‘HEROES AND LEGENDS’ – The theme of this years Bathurst 1000

Adding some spice to the event this year, Supercars are to induct twelve of the top names in Aus motor sport history at this years Great Race. A function is scheduled for Friday evening with the Supercar and Bathurst organisers paying homage to the greats of the sport.

Last year 204 000 people attended the pilgrimage to the mountain and there is the belief that an even bigger crowd is expected this year. Certainly the resurgence of Ford has lifted the competitive edge and the ‘face off’ between the fans on top of the mountain is likely to be as robust as ever.  Some other significant stats for the 2016 race: An average of 2.1 million viewers during the race, peaking at 3.1 million with the podium presentation at 2.6 million giving it the #1 slot in Aus television. Motor sport is recognised as a real sport down under.

Of course the result of the 2016 race is legendary stuff in itself. With ten laps to go a Volvo leading the charge with two Holdens….the three cars nose to tail into the 300Km/h Chase….. McLaughlin, Wincup and Tander involved in the most bizarre incident best watched on Video. The point being here that this 1000km race never fails to bring on drama…….and this year is unlikely to be any different. Winners last year Will Davidson and Jonathan Webb were running 4th with ten laps to go…best watch the video on http://www.supercars.com/  to see what happened. 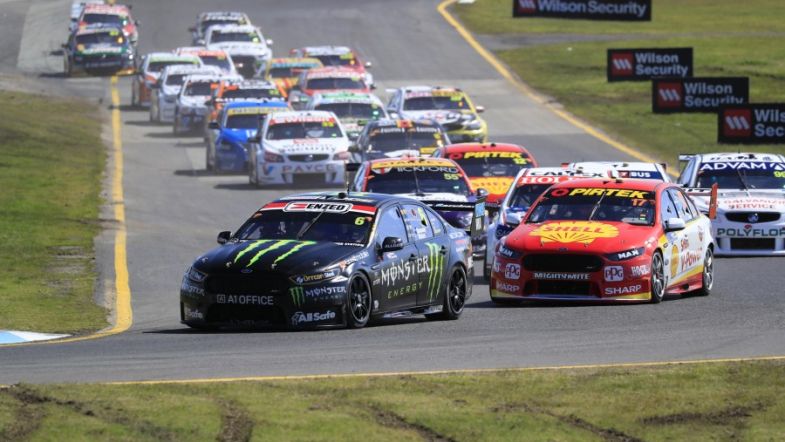 The Sandown weekend nearly two weeks ago brought a new team to the winners circle in Cameron Waters and Richie Stanaway and also signalled the fact that the Penske Shell V-Power Falcons had their wings clipped by the Prodrive Ford crew. That bodes well for the race as we now have at least five very quick Fords, any of which could take both the top ten shootout on Saturday or have their teams on the top spot of the podium on Sunday.

In the Holden camp, I have a feeling that unlike Ford who are pretty focused on the present, the GMH guys have two long term programmes running preparing new cars and engines for next year and beyond which just may be taking the boil off what needs to be done right now. The Sandman Turbo V6 engine programme (2019) and the new ZB commodore prep are getting good focus and from what we see and hear things are looking good on both fronts. The tyre issues experienced by the 888 crew over the Sandown weekend may be helped by the decision to go back to the harder 2016 spec Dunlop tyre for Bathurst. Vertical loading on the rubber at Mount Panarama is much greater and very different to most other tracks. So…. all round a good decision, it would be sad to see tyre failures be the major determinant to the course of the race. 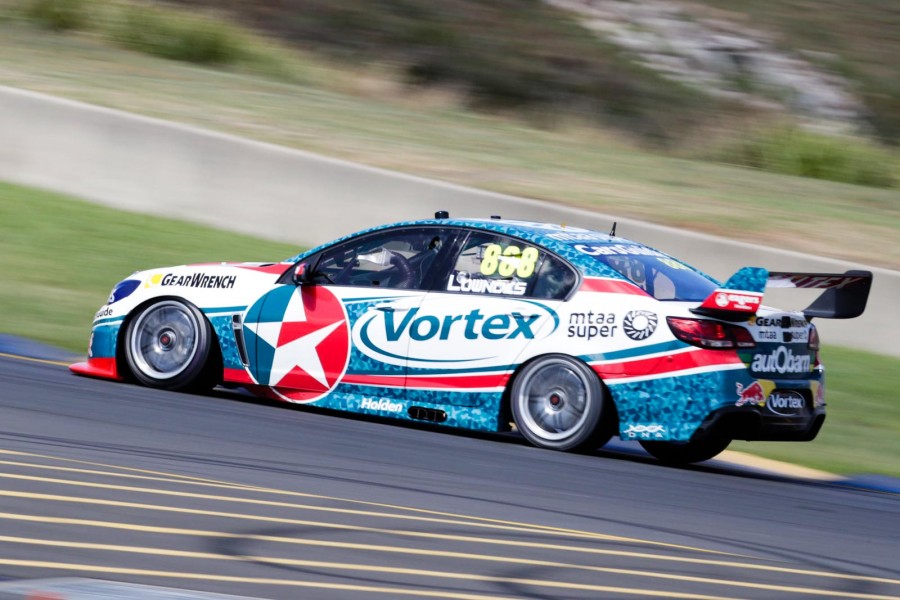 Craig Lowndes – can the ‘old man’ at the mountain do it again?

I think it is going to be a cracker…..

Some homework for those that are keen to get to know more…please spend some time watching historical top ten Bathurst shootouts…… and I found the 2013 event (featured below) a very good example of what we may see next Saturday.  Practise starts on Thursday 5th and after three days of practise, the quickest cars will be going into the top ten on Saturday.

Some Background to The Top Ten shootout

The shootout is fascinating for many reasons. Firstly, having selected the ten fastest cars by Saturday, each are required to run that single fast lap for the final grid. The cars leave the pits for their opening lap doing the best they can to heat brakes and tyres (no blankets used in this form of racing…thank goodness). The selection of tyre pressures is critical because the drivers rely on that warm up lap out of the pits and a good portion of the ‘hot’ lap to build pressures to point that is most effective. The resultant car behaviour can be quite interesting early in the run with the cars often settling only halfway through that quick lap. The camera work and commentary is superb. Most important though, the order in which they run with slowest of the top ten running first should, you would think, make the outcome fairly predictable, it does not…with many an upset on the way.

It is extremely interesting to see the difference in the approach the various drivers have to that one lap attack. Most take a moderately cautious approach to ensure the car is kept in one piece knowing that it is a long race. On the flip side, the top ten shootout at Bathurst is a top Australian sporting event and the pressure to do well is huge.  The balance between sanity prevailing and the red mist descending sometimes gets a little unglued.  There have been some spectacular laps and among them the 1991 Peter Brock lap….. here it is again….

and Greg Murphy’s lap of the Gods…. 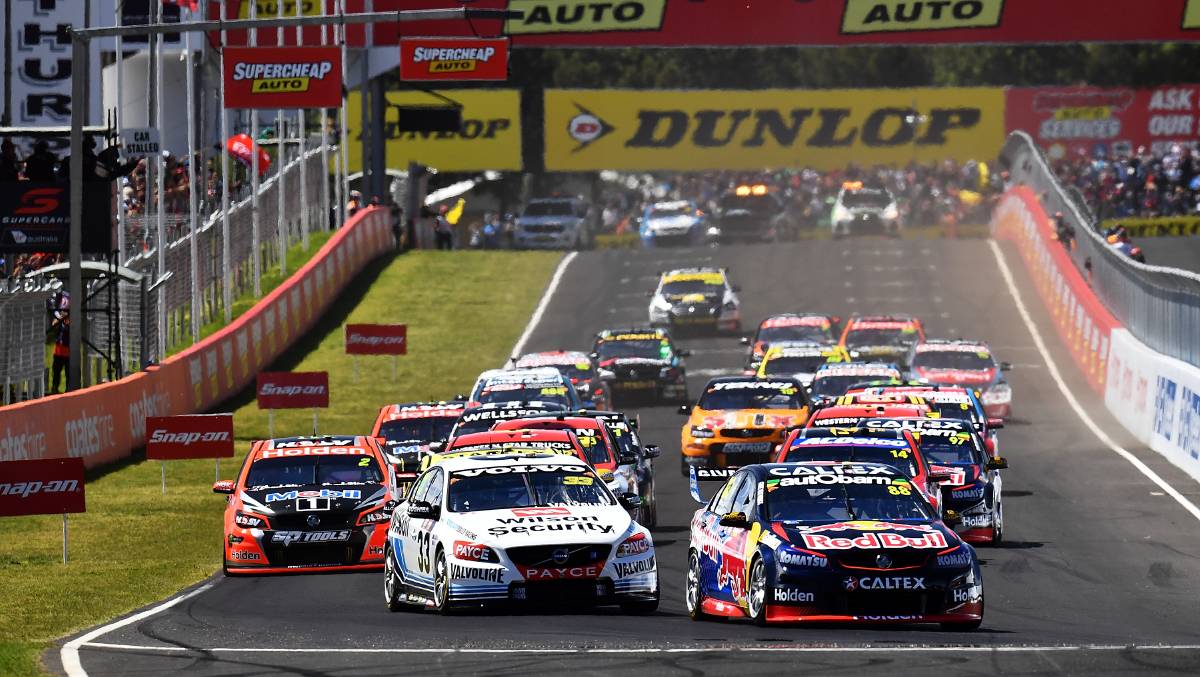 A 1000km race will always bring a fair chunk of drama in its own right but at Bathurst the weather often plays the final card so watch the forecast carefully. So far, Thursday and Saturday look good, partly cloudy and 21C…Friday and Sunday partly cloudy with showers…..so it could be a little damp!!

We all know by now that this is a Ford vs Holden (GM) scrap….. and yes Nissan is in the picture as well but as things are at present the top Ford/Holden bunch seem to keep the Orientals at bay….. Although I must say that the Altimas have a really crisp sounding package and hope they get a few cars into the top ten.  Having been to the mountain to experience the event, I can equate the feeling of expectation and yes..wound-up excitement… to that which existed with our very own 9 hour and 1000Km racing so many years ago.

Who will take it this year? I do not know.. but I will have a crack at it and say Scott McLaughlin and Alex Prȇmat…and that because I think Scott deserves it..very young, no ego, just a good bloke and very quick. As an outside call, the old fox Craig Lowndes could pull the rabbit out of the hat…he is due one.

I Came in for some stick this week from a few local motorhsport friends giving me daggers for being so supportive of Aus Supercars and not putting more effort into scribing on local stuff. So let me make this absolutely clear from the get-go. I have the greatest empathy for those involved in SA motorsport.  For a group of people who have been involved through the good times where our set-up was as good as the best in the world,  to see the difficulties being experienced now particularly in saloon car racing, is heart breaking.  I am not an administrator nor race organiser and I wish those involved in trying to get things back on track (pun intended) the very best. I will help in whatever small way I can……  In the meantime we can enjoy good racing from a smorgasbord of what is available worldwide…..and for me the Supercar series is currently number one on my list….why not!?

For those interested in serious racing, this is the ticket, so get on to Superview at www.supercars.com/superview/  pay your R400 odd bucks and you have not only Bathurst but the whole 2017 season at your fingertips…. Best money I have spent so far this year.